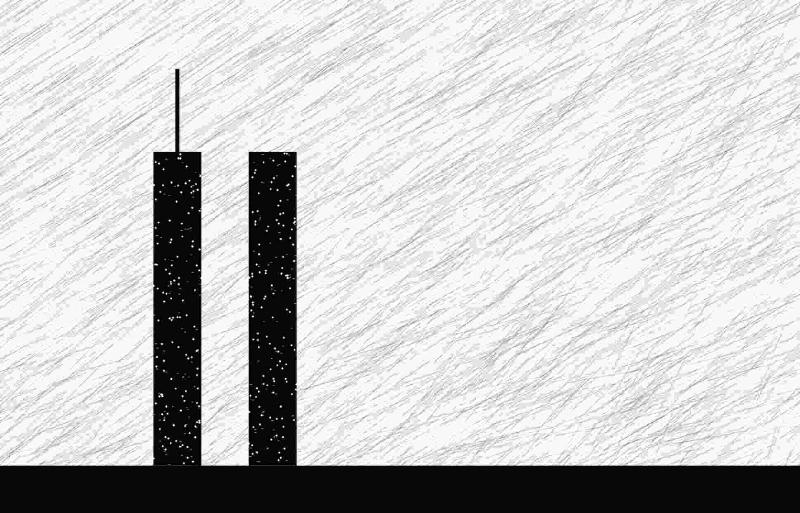 Twenty years ago today, on a sunny Tuesday morning in September, I was leaving my apartment in Brooklyn, heading to my office at 26th and Park Ave South, in Midtown Manhattan.

I was lucky. I worked relatively uptown. I didn’t see anyone jump. I didn’t know anyone in the towers. Others were less lucky. We watched the various layers of fear, loss, and grief slowly grip the city: fighter jets circling for days, the plume of ash falling over Prospect Park, people sitting on benches sobbing. Pleas for information on missing people appeared on nearly every vertical surface in town, culminating at the Armory near my office on Park Ave. Over time these notices transformed into memorials as the grim realisation set in that these people would never come home. I remember constant sirens, kids raising money for dead firefighters, flowers on doorsteps, benches, places of worship, and the repeated image of the plane hitting the south tower in an eruption of concrete, glass and fire, over and over and over again.

In the days immediately following the attacks, my girlfriend reached out to our friends and loved ones to collect their stories.

Below is my unedited story which I wrote 20 years ago. Please forgive the melodramic rambling writing of my traumatised 20-something self. I share it today, not for sympathy, or spectacle, but simply to reflect an experience that I believe many have shared and may still be processing. I hope it may help others to find peace with this tragic event that continues to reverberate around the word.

Try as I might, to get to work on time, at 9:00 I never seem to make it. Usually I end up leaving my apartment around 8:30 or 8:40. Being a tremendous geek, I wrote a program a few weeks ago to send a haiku to my cellphone every morning at 8:50am. My morning commute takes me over the Manhattan bridge on the Q train. I had made a little game of trying to get below ground before my haiku arrived so that I would receive it on the bridge. This has helped me get to work a little earlier lately.

Tuesday morning was going according to schedule. I dropped Liz off at the gym and raced into the station to make my 8:50 underground deadline. The Q train was leaving as I ran down into the station and as I began grumbling to myself about having to wait for the next train, the first announcement came over the loudspeakers: “Due to an incident at the World Trade Center, there is no N or R service to Cortland Street at this time.” … “Bummer”, I thought. “Good thing I’m not going to Cortland Street.” The next train arrived and everyone piled into it.

As usual, there were delays between DeKalb Avenue and the Manhattan bridge since the Q and the W merge onto the same track at that point. As we were sitting in the tunnel the conductor made an announcement: “Ladies and gentlemen, due to congestion on the Broadway line, we have red signals in front of us. We should be moving shortly.” This happens all the time. Nobody seemed to take any notice. And soon enough, we were moving - still underground. As we got closer to the bridge, we stopped again. Another announcement: “Ladies and gentlemen, due to (pause) a plane crash at the World Trade Center…” I can’t remember the rest of the announcement. Everybody stopped listening at that point. I tried to imagine the best: perhaps a plane clipped the side of one of the towers and went down in the river somewhere. I expected to gawk and see nothing. Briefly I imagined what it would look like seeing flames rising out of the twin towers. “Yeah, right…” I thought. “As if that could ever happen… I went back to reading my book. An English translation of the Bhagavad Gita. As the train pulled out of the tunnel and onto the bridge a few people started looking out the windows. Within seconds everyone on the train was gasping and pressed to the glass. I was on the north side of the train. The towers are (were) tall enough that I couldn’t see much from where I was standing. I had to crouch down to see the tops of the twin towers.

What I saw caught me completely off guard. It was the most real and penetrating vision I have ever seen. A huge flaming black void in the north tower with thick black smoke pouring out and, what looked like, a huge smoking flaming gash in the south tower. More smoke than I ever imagined could come from a building. I wished for it to be a movie or something on television or like the images in my head a moment before. I wanted to change the channel, to look away, but it kept being there. I kept looking. “What a horrible, absurd accident”, I thought.

The train went back underground as it reached the other side of the bridge. Some people stood in a state of questioning shock wondering what they had just seen. Other stood silent and grave. Some talking. Others, being New Yorkers, went back to reading their newspapers with this morning’s “news”. I pulled out my journal and wrote this:

“Today, right now, the World Trade Center is on fire. Thick black smoke. I can hear sirens from underground. in the train. It was terrifying to see from the train. Between the masses of people squeezed against the windows as we went over the bridge. Seeing the clear swath cut by the plane. Through the now burning, twin towers. The kind of apocalyptic vision one only sees in dreams. Like a terrifying omen. What will I choose it to mean?”

For reasons I still can’t explain, I continued on my way to work. I got off at 14th street and sat down on a bench to wait for the N/R. Watching my Q train leave the station, I could stare into the faces of everyone on it as they went by. Solemn. Sober. Shaken. The N/R came and I continued to work, still contemplating this terrible “accident”.

More confusion followed. No one in the office had any definitive information. No one had a television. The web sites were all slammed with traffic and impossible to reach. A few people had radios and we listened as accounts came in. We found out that there were two planes. Then we heard about the first collapse. I had to ask several people to confirm that it had collapsed completely. I couldn’t believe it. Then the second one. Manager’s Meetings every five minutes. Varying strategies. Stay put. Don’t leave. Call the people who aren’t here. Tell them to stay home. We’ll keep you informed…

I spent a great deal of time pacing around. The phones were all busy. I talked to some people wanting to have something interesting or engaging to say. Nothing. Then my phone rang. “How did you get to work?” the voice asked. I realized that it was a friend who works a few blocks away. “I don’t know” I said, and described my commute. As I had already done several times that morning. Repeating the same story over and over as if that would help it to sink in or make some sense. Like I’m doing now. Again, I didn’t know what to say. “Do you wanna meet in the park?” I asked. So we met and sat in Madison square park. I was amazed at the numbers of people out wandering. Sort of a mass migration uptown. We sat on the bench and just kept asking each other “what do you do?”, “I mean, what is this?”, “How does this happen?” We went to the bodega where I go everyday. I got my same sesame bagel with cream cheese and grapefruit juice that I get every day. It was a surreal moment walking out with my usual brown paper bag, walking against the flow of thousands of people coming up Park Ave South as I went back to my office.

The building where I work is being demolished for renovation. For the past several months I have watched workers take filing cabinets, plumbing, office furniture, miscellaneous strips of metal, acoustical tile, chunks of asbestos, electrical wiring, et cetera out of the building in large metal carts to be crushed and and carried off in gigantic garbage trucks. The entire building (with the exception of our floor) has been completely stripped. Down to the concrete columns that support it. As I walked back to my building, I looked down Park Avenue at the gigantic plume of smoke and dust. I paused in the median and then continued back up to my office. On my way up the elevator, my cellphone beeped. My daily haiku had arrived – only a few hours behind schedule.

I got home that day around 3:00. When I emerged from the subway station in Brooklyn I immediately noticed the smell of burning plastic. I went to donate blood but they were full. I think I’m O negative. But I’m not sure. They told me to come back the next day. I spent the rest of the day glued to the one television station we still receive since everything was broadcast off the antenna on the north tower of the WTC.

I haven’t seen a commercial in over 48 hours.